Andy Butler felt his side played their best football of the season so far after three goals inside 18 minutes fired them to victory over Long Eaton United. 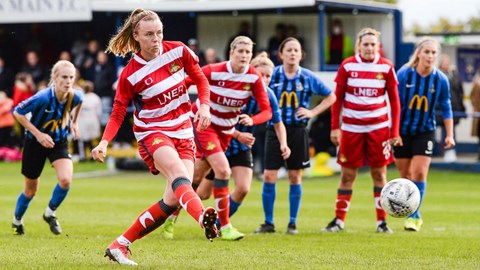 Butler said: "I was pleased with the first-half when we scored three excellent goals, it was probably the best we've played all season.

"The girls passed the ball and moved, it was a joy to watch and I didn't have to do anything as manager on the side.

"In the second half it was a professional performance to see the game out, I think Ellie only had one shot to save all game."

McWilliams' opener came just five minutes in at Oxford Street, with the Belles 3-0 up and in control after 23 minutes. Butler believes his side are good enough to impose themselves on any opposition this season.

He added: "We do a lot of work watching other teams and seeing how they setup, so we knew if we got at them from the off it'd be a tough task for them.

"I keep saying to the players to start well and put a marker down, then you can always back off. If you back off from the start then you never get into the game.

"We want to make this ground a little fortress for us , where teams see the results here and don't fancy coming here. We've got to keep plugging away and doing the basics right, and if we keep scoring goals early on it gives you a step up."