Sophie Brown, Jess Andrew and Nadia Khan struck as the Belles continued their good pre-season with victory over Leeds United’s development side on Friday night. 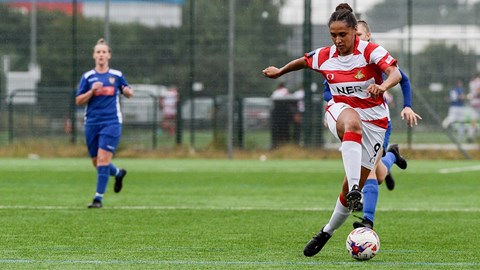 Andy Butler’s side opened brightly and Brown showed a taste of what was to come in just the second minute when she outmuscled a defender and got a shot away, the visiting keeper palmed the ball away and although the ball did end up in the back of the net via Debbie Barry it was ruled out for offside.

Brown did open the scoring after six minutes - once again showing more strength than her opposing centre-back, before firing low into the back of the net.

The Belles could easily have doubled their lead before the 10-minute mark was up, with Brown setting Chloe Bethell free down the right. The latter rounded the keeper well, but a defender got back to clear her effort off the line.

Jenna McGee went close to extending the Belles’ advantage on the half-hour mark with a move she started, feeding the ball left to Barry. Good movement saw the ball switched all the way to Bethell on the right wing, before being returned to Male on the edge of the area who fired just over.

Mclee again went close with only a good point-blank stop from the impressive visiting keeper denying her, while Brown and Barry also went close but there was only one goal in it at the break.

Lily Harrison went close with a shot from distance shortly after the restart, with Brown again going close after 53 minutes with an effort that was blocked and firing the rebound wide.

The Leeds keeper had to be alert to turn a well-struck free-kick from McGee over the bar, but the visitors got the first goal of the second period with a low finish on the hour mark. They also sent a free-kick over the bar before the Belles regrouped to go on and regain the lead.

Butler rotated his squad, with one eye on Sunday’s friendly at Sheffield FC, and it was the fresher legs that sealed the victory.

Jasmine Saxton and Nadia Khan had seen efforts blocked prior to that, with the pair combining again in the final act of the game as Saxton’s surged down the left before providing the pull-back for Khan to turn the ball home at the far post.

Season tickets for the Belles' 2020/21 campaign cost just £30, with supporters currently expected to be able to attend all home games starting with the visit of Bedworth United on Sunday September 27. Click here to purchase your season ticket now.