Belles coach Andy Butler said his players have shown an attitude that would not look out of place in the professional game after drawing pre-season to a close with a battling performance at Sheffield FC. 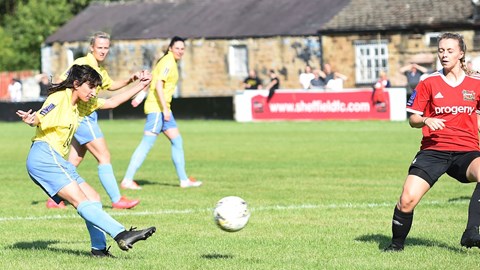 The hosts, who compete a division higher than the Belles, claimed a 2-1 victory but the match felt like a competitive fixture as the visiting players heeded their manager's call to treat it like there were points at stake.

Butler said: "I couldn't be more pleased, we've had a player come off with concussion and the girls were picking up little cuts and bruises as they all got stuck in.

"Credit to them, every single player. Their attitude really is fantastic - they set an example that even a lot of professionals could learn from.

"When Nick (Buxton) and I take training the desire we see is incredible, there is a real willingness to push each other on. The character is fantastic to see and makes my job so easy."

The result may have gone against the Belles, despite Jasmine Saxton's opening goal, but Butler felt there were plenty of positives from the game as his side were in contention right til the final whistle.

He added: "It was a really competitive game and you couldn't tell there was a division between us, we played excellent as individuals and as a collective.

"We treated this like the first game of the season and I think it showed with the competitive desire from every player to put a shift in."