The Belles completed their build-up to the 2020/21 campaign with a battling display at higher division Sheffield FC. 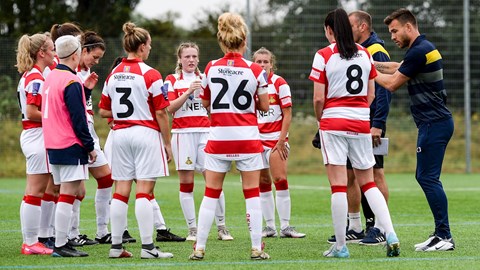 Jasmine Saxton’s first-half goal gave the Belles the lead, but the Northern Premier Division side fought back to seal a 2-1 victory.

Hannah McWilliams started it off by feeding Nadia Khan on the left wing. She played a one-two with McWilliams again before looping the ball over the home keeper, the ball was definitely heading in just inside the far post but Saxton showed a poacher’s instinct to get the last touch.

Sophie Scargill forced another safe out of the home keeper after 22 minutes, collecting the ball from McWilliams.

The home side levelled from close range after 24 minutes, in what was their only chance of note in the opening half.

The Belles continued to play positively as they looked to regain their lead. Sophie Scargill was just prevented from getting a shot away when a corner was not fully cleared, with the best chance coming in stoppage time.

Saxton got away down the right, with a vital interception from the last Sheffield player cutting out her cross with Jess Andrew and Khan both lurking to turn the ball home.

The Belles continued their trend of starting brightly in the second period, with Andrew seeing a shot blocked after 53 minutes before Khan’s follow-up effort was held by the home keeper.

And moments later a quick counter was instigated by Pheobe Sneddon winning the ball, it finished with Khan crossing the ball but none of her team-mates had managed to get up quickly to get on the end of the cross.

Belles coach Andy Butler rotated his squad as the second period progressed, mindful that the players have been carrying out extra gym sessions and had played just two days prior.

That disrupted the rhythm a little bit, with Ellie Sharpe punching a cross away on the hour mark and pulling off a close-range stop after 68 minutes.

The home side did claim victory when they fired home after 79 minutes, but the Belles more than matched their opponents throughout the match so head into the opening league game in good spirits.