Nick Buxton felt his side were shown the standard they need to reach by Wednesday’s friendly opponents Nottingham Forest. 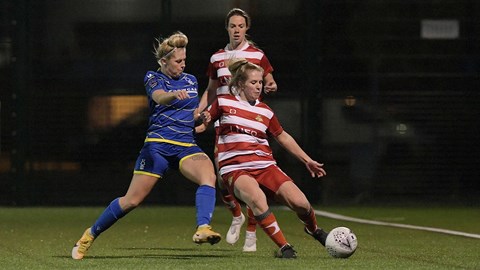 Forest, the highest-placed opponent in the pyramid the Belles have faced this season, ended up winning the match 4-0 but Buxton felt there were plenty of positives from this and the preceding wins over Leeds United's development side and Stockport County.

He said: “We played a really good side who were good with and without the ball. We knew it were going to be a hard game, we’ve done alright in places and it has been a good test for us - we know what we need to work on if we want to get to the level they are at.

“We’ve again looked at a few new players and put people out of position to challenge them - It’s looking for next season and how we can make a good team better, to compete with the likes of Wolves at the top of our league and then push on to match the likes of Nottingham Forest in the division above.”

One significant positive from the three end-of-season friendlies has been the performances of RTC-products Freya Mai Rattenbury and Lily Harrison.

Buxton added: “Freya was really good in the first games against Leeds and Stockport, Forest was tougher and she didn’t look out of her depth. It has been a good test for her and she’ll learn for this experience.

“And I said to Lily Harrison that she looks a different player since we came back, we’ve played her out of position a few times to see how she coped and she’s done really well.”

Want to follow in the footsteps of Freya and Lily and tryout for a place in the Belles' RTC squads? We will hold trials on the following dates:

There are opportunities in all age groups, but we are particularly keen to hear from girls who are eligible for the U12 and U14 age groups as well as goalkeepers.

Participation is via registration only -  to sign up please click here, or for more information email chantelle.haigh@clubdoncaster.co.uk.