Captain Kirsty Smith says everyone in the Belles squad has enjoyed returning to training after the lifting of lockdown restrictions.

The Belles have now had three sessions back as they prepare for a series of friendlies to draw the 2020/21 season to a close. 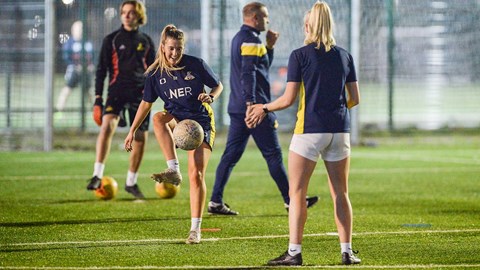 Belles back in training

Kirsty said: “It feels amazing to be back. There have been lots of smiles and everyone is happy to be here - we’ve been waiting forever but now we’re back and the atmosphere has been great and everyone is enjoying it.

“It feelt like so long since we were last together as a team, but we’ve had individual training programmes and have been out running. I’m lucky enough to have gym equipment at home too so could do some weights.

“But it’s so nice to be back. Football is a team thing, we’ve missed that unity and being able to socialise with each other again - it’s a bit of a return to normality really. It’s good to be moving forward and getting back on track.”

Kirsty shared the club staff’s disappointment that the FAWNL Midlands Division One campaign was curtailed, but says the girls are now only looking forward.

She added: “We were gutted about it, we worked so hard to maintain momentum and were second in the league - but it’s a decision which is out of our hands.

“All we can do is work together as a team in training, and take the opportunities that we have now to prepare for the season ahead. We were gutted and clinging onto hope it could start back up, but we have to move forward.”