Nick Buxton felt the 7-1 friendly victory over a Leeds United Development side was just reward for the hard work the players had put in during training. 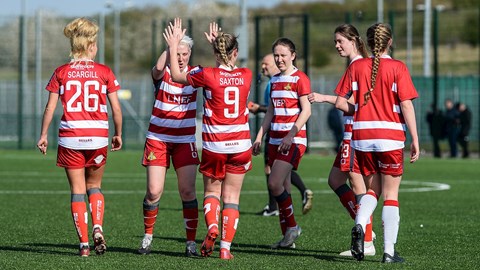 Sunday’s match was the first outing for the first-team since they were able to return to training at the end of March and they racked up a comprehensive win.

“We’ve done a lot in training on moving the ball quickly and transitions, myself and Andy Butler had looked at that earlier in the season too. We’ve worked hard in training - the girls have come on board and put in the hard graft which is good.”

The Belles squad were bolstered by two trialists plus Freya Mai Rattenbury who made the step up from the U16s and recent signing Lauren Breen.

Buxton added: “The new girls made a real difference, it gives the squad a boost - it’s a better squad than ever which gives us a real boost going forward.

“When you come back after a long time of you can have as many training sessions as you want or inter-squad games, but you need to play matches and it’s good for us to get back out there. Everything looks going forward.”