Rovers travel to face Northern Premier League side FC United of Manchester in the Emirates FA Cup first round this weekend.

Darren Moore’s side go into the game on the back of a 2-2 draw at AFC Wimbledon in Sky Bet League One.

Saturday’s opponents are currently 13th in the table having only lost one of their opening seven league games. Their only defeat came away to South Shields at the end of October.

They have already beaten four teams to get to this stage of the FA Cup competition, having knocked out Pontefract Collieries, Curzon Ashton, Alfreton Town and Guiseley to set up a first round tie with Rovers.

FC United of Manchester manager Neil Reynolds spoke to his club’s in-house media team soon after the draw to say he was looking forward to testing himself against a league team.

Reynolds said: “Doncaster Rovers are doing well in League One.

“I’ve no doubt that it will be a really tough tie, we’ll have to be at our very best but we’ve got the big side we wanted.”

Rovers have faced five non-league clubs in the past eight years, and have progressed against each of them – avoiding any cup upsets.

They have faced the likes of Bradford Park Avenue, Weston-Super-Mare, Stalybridge Celtic, Ebbsfleet United and Chorley since 2012.

Rovers got to the fifth round of the competition during the 2018/19 campaign for the first time in 63 years.

Then manager Grant McCann guided his side to a wins over Chorley, Charlton Athletic, Preston North End and Oldham Athletic respectively, before they were handed a tie against Premier League side Crystal Palace.

After a spirited display, Rovers bowed out of the competition after a 2-0 defeat to Roy Hodgson’s men.

Saturday’s game at Broadhurst Park will kick-off at 5.30pm and be broadcast live on BBC Two. 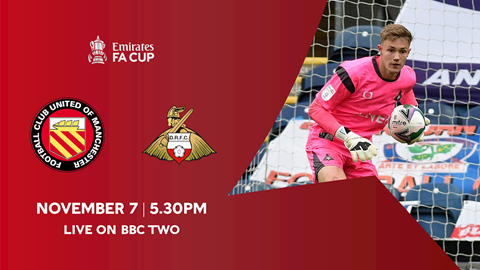 Rovers put in a five-star display to progress through to the second round of the Emirates FA Cup after a 5-1 win at FC United of Manchester.

A double from Josh Sims was complemented by goals from Fejiri Okenabirhie, Ben Whiteman, James Coppinger as Rovers made it past their Northern Premier League hosts who hit back through Regan Linney’s first-half strike.

Rovers, under the watchful eye of Andy Butler who was stepping up in the absence of Darren Moore, made four changes from the side that started Tuesday night’s trip to AFC Wimbledon.

Louis Jones, Coppinger and Brad Halliday all made their returns to the starting line-up, whilst there was a full Rovers debut handed to Ed Williams who started on the right-hand side of the midfield.

It was Rovers skipper Whiteman who had the game’s opening chance, striking a free kick into the wall from distance which headed just wide of the post for a corner.

Coppinger went close four minutes later as his first-time effort from the edge of the area stung the palms of Dan Lavercombe in the FC United goal following good build-up play down the right from Sims.

Rovers though did take the lead on 13 minutes, with a ball through the middle by Matt Smith splitting open the home defence and allowing Halliday to burst down the right.

He unselfishly squared the ball across the face of goal to the unmarked Okenabirhie who tapped into an empty net with Lavercombe left stranded.

The lead was doubled on 21 minutes with Halliday again providing the assist, this time his long ball through caught everyone by surprise as he broke forward, and with the home defence looking for an offside against Okenabirhie, it was the Rovers’ skipper Whiteman who pounced.

He raced clear before setting himself to shoot calmly into the corner low beyond the advancing Lavercombe to extend the lead.

That didn’t deter their Northern Premier League hosts who hit back on the half hour mark, with a swift counter-attack seeing them grab a goal back.

A Rovers corner was cleared by Charlie Ennis before Linney nicked the ball around Reece James and raced clear to set up a one on one with Jones which he didn’t lose, slotting the ball into the corner to reduce the deficit.

The two-goal lead was restored almost immediately though with a brilliant solo run down the left from Sims resulting in him cutting onto his right-foot before beating Lavercombe from close range, despite the best efforts of the former Torquay and Wigan man.

It was four with four minutes to go until the break; a ball across from Sims was chested down by Whiteman into the path of Coppinger who struck a left-footed effort past Lavercombe, with the aid of a deflection, to make it 4-1.

It was a case of as you were for the second half, with Rovers again showing attacking intent, as Reece James sent a low shot just wide of the far post after getting into the penalty area after a run down the left-hand side.

Rovers made it five on 50 minutes, with a ball across from Smith finding Sims unmarked once more, and he fired in off the underside of the bar via a deflection from Curtis Jones.

Okenabirhie then went in search of his second just after the hour mark, twisting and turning his man before looking to fire in from a tight angle, this time though Lavercombe was switched on to deny the Rovers’ No.9.

The hosts did get another chance of their own as Ennis found space from close range, though this time his low effort wasn’t enough to test Jones who claimed comfortably.

Jones was alert once more to deny another effort from the hosts, with substitute Dan Cockerline’s 20 yard shot straight at the Rovers stopper.

Cameron John down the other end went close from a James’ corner, rattling the crossbar before Okenabirhie’s ball across the face of goal evaded everyone in a Rovers shirt.

FC United still came forward with their chances, and full back Michael Donohue almost produced a spectacular solo effort of his own, with his low drive going just wide of the post, before another substitute Michael Fowler sent an effort just past the post from the edge of the box.

Rovers were unable to add a sixth in the latter stages of the game, though there was a debut off the bench for 17-year-old midfielder Liam Ravenhill, replacing 39-year-old Coppinger, with the veteran Rovers man having played with the youngster’s dad during his early seasons at the club.

Rovers are back in cup action again on Tuesday night when they host Wolverhampton Wanderers in the final group game of the Papa John’s Trophy at the Keepmoat Stadium.