Gary McSheffrey takes charge of his first game as Rovers caretaker manager when Mansfield Town visit the Keepmoat Stadium in the Emirates FA Cup second round on Saturday.

Rovers reached this stage of the competition with a 1-0 victory over Sky Bet League Two side Scunthorpe United in November, with Tommy Rowe netting the winner at the Sands Venue Stadium.

Nigel Clough's side have seen an upturn in league form recently and that was helped by a 1-0 triumph at Sunderland in the first round. 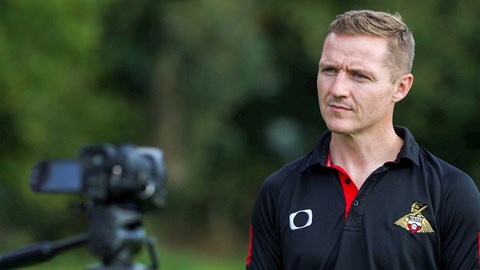 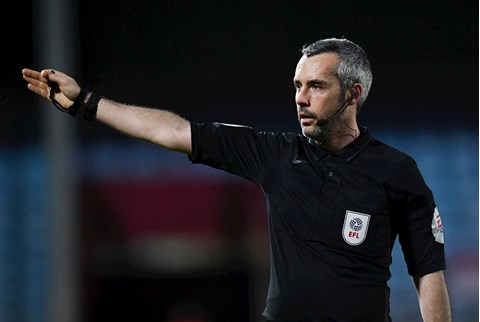 In opposition: Mansfield Town - what they're saying


The son of renowned manager Brian Clough, Nigel has just completed a full calendar year with Mansfield Town as manager having joined the club in November 2020.


Branden Horton discusses his run of starts and his desire to keep improving at his hometown club in this weekend’s programme.

In opposition: Mansfield Town - ones to watch


Mansfield Town has a number of players who can cause problems for the opposition.

Rovers exit the Emirates FA Cup in the second round with a 3-2 defeat to Mansfield Town.

It was the prefect start to the tie for Rovers when quick passing saw them break away with Aidan Barlow finding Branden Horton unmarked to rifle into the roof of the net for his first professional goal, but experience told in the second half as goals from Will Forrester and George Lapslie (2) took the game away from the young Rovers side.

After a difficult 20 minutes in the second period, Rovers rallied with Tommy Rowe at the heart of everything good for Rovers. It was fitting that he should be the one to capitalise from the free kick he won in the 84th minute to make for an interesting finale.

Rovers threw defenders forward in the final minutes but were unable to get the third goal needed to take the tie to a replay.

Interim manager Gary McSheffrey made three changes from the league defeat to Burton Albion with Louis Jones, Lirak Hasani and Liam Ravenhill coming into the team in the place of Pontus Dahlberg, Ethan Galbraith and Ben Close.

Rovers scored with their first chance on goal in the eighth minute. Aidan Barlow cut in from the right wing and sprayed the ball across the face of goal and past Nathan Bishop all the way to Branden Horton who buried into the back of the net from the far post.

Full of confidence off the back of his goal, Horton continued to put in a impressive shift at left wing back, defending well against George Lapsile but also attacked with real intent, finding some quality passes to his team-mates in front of him.

He was well insured by the cover of Tommy Rowe who put in another excellent performance out of position. Particularly in the first half when Rowe stopped what seemed a deadly breakthrough on goal by Rhys Oates.

The visitors first attempt on target came from Stephen Quinn who tried his luck from distance, but it was no trouble for Jones who comfortably saved.

Throughout the opening period it was a competitive affair with both teams seeing equal measures of the ball and some good chances at either end.

Just before the half time whistle blew, Rovers had a chance to extend their lead through Arsenal loanee Matt Smith who was allowed acres of space on the edge of the area. When he eventually took a chance on goal his shot was blocked.

Mansfield started the second half with real intent, and got themselves back on level terms with just three minutes played.

It was a super stop by Jones initially to deny George Maris as he broke beyond the defensive line and create a one-v-one. The ball went for a corner which fell for Forrester at the back post who was able to head in unchallenged.

The visitors – buoyed by their goal – continued to turn up the pressure and Ravenhill picked up a yellow card as he stopped a break-away on the half-way line. That was to be his final intervention of the afternoon as he was replaced by Ben Blythe which released Rowe into the midfield.

It took time for Rovers to adapt to the change and some scrappy clearances forced Jones to make saves to deny Maris and Stephen Quinn before Lapslie fired in a second for the visitors and change the entire mood of the game.

Confidence spread through the visiting players and fans and they continued to fly forward in numbers. Rowe, Hasani and Anderson all made vital blocks.

A poor touch in the centre of the park from Rovers provided Mansfield the chance to break forward in numbers and the overload allowed them to pass around the Rovers defence and leave Lapslie with a tap in from close range.

Aggressive and determined pressing from Rovers won the ball back up the pitch and work it to substitute Tiago Cukur. The young Turkish international’s first touch was excellent, but his second one got away from him and was into the gloves of Nathan Bishop.

It was potentially a tough night for keepers with the rain and wind swirling around the Keepmoat Stadium, but Jones showed composure as his goal continued to come under threat – it was a smart stop to deny Jordan Bowery before he collected Maris’ follow up effort.

At the other end, Horton showed desire again as he made a powerful run forward and whipped a great ball into the box, but it was just over the head of Joe Dodoo.

Rovers pulled it back to 3-2 in the 84th minute with a move straight off the training ground. Rowe was hacked down just outside the box which allowed them to work a free kick. It was worked short to Rowe who drilled the ball in to the bottom corner.

Rovers – dragged along by Rowe – found the energy to work and chase in the middle of the park again and Anderson joined the attack but they were unable to find the all-important goal which would take the tie to a replay.

In opposition: Mansfield Town - what they're saying


The son of renowned manager Brian Clough, Nigel has just completed a full calendar year with Mansfield Town as manager having joined the club in November 2020.


Branden Horton discusses his run of starts and his desire to keep improving at his hometown club in this weekend’s programme.

In opposition: Mansfield Town - ones to watch


Mansfield Town has a number of players who can cause problems for the opposition.

Details for Rovers’ Emirates FA Cup second round match against Mansfield Town have been confirmed.

The match will be played on Saturday December 4 and will kick off at 3pm.