Manager Darren Ferguson was pleased with his young side’s performance as Rovers came through their group unbeaten. 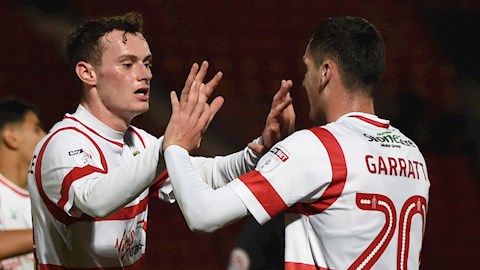 Liam Mandeville’s first-half goal was cancelled out by Scunthorpe’s Clayton Lewis, before Rovers picked up the bonus point in the penalty shoot-out after 90 minutes.

Ferguson fielded a much-changed side, with nine changes from the weekend, but it was his younger players he was particularly impressed with.

“The young lads that started, Morgan James and Danny Amos, did very well, and we finished with five youth players on the pitch with an average age of 19, so I was very impressed,” said Ferguson.

“I thought Tyler Garratt was outstanding the whole night, Alfie Beestin at wing back was excellent and him and Liam Mandeville linked up well for the goal.

“It just goes to show that the work that we put in at the training ground is paying off, the players are concentrating and can play in different systems, so I’m delighted with the ones that have played.”

Ferguson also believes the Checkatrade Trophy can be a springboard to a successful season, but knows consistency will be key over the coming weeks.

“There is a great togetherness in the squad, everyone knows that we need to be higher in the table, but with the younger lads mixing with the more senior professionals, that says to me that there is a squad that is working together,” he said.

“Even though we haven’t topped the group, we haven’t lost in this competition and that’ll give the younger lads the confidence in future games, should they be called upon and I’m delighted with how Garratt, Beestin and Issam Ben Khemis did tonight especially.

“If we can find consistency then we can still have a good season, we don’t need to put pressure on ourselves, we’ve got two big games in Ebbsfleet and Rotherham coming up and we need to be consistent.”

Tickets for the annual Big Bang fireworks display at the Keemoat Stadium are on sale now from the Club Doncaster Box Office, you can purchase your tickets by calling 01302 762576.