Rovers supporters packed the new fan park held prior to the opening game of the season against Wycombe Wanderers. 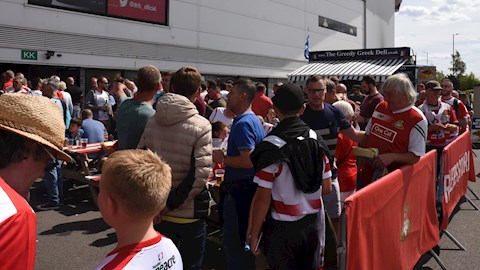 Supporters of both sides soaked up the atmosphere with live music and a question and answer session with club legend Glynn Snodin.

Nick Akester and Daniel Parker Smith provided the live music from 1.45pm, with their sets coming either side of Snodin talking about Rovers’ impressive start to the season.

A Greek street food stall provided additional food options for fans to enjoy as they took in all the match build-up.

Check out images from the event, as well as inside the Belle Vue Bar itself, above.

Rovers return to the Keepmoat Stadium on Tuesday August 21 when they face Shrewsbury Town in Sky Bet League One.

The most cost-effective way to ensure you don’t miss a minute of what promises to be a thrilling campaign is with a Season Membership, which are still available. You can buy in person from the Club Doncaster Box Office, by calling 01302 762576 or going to tickets.clubdoncaster.co.uk.