Rovers’ U18 side opened their season with victory over Oldham Athletic to stretch their winning run in the league to nine games. 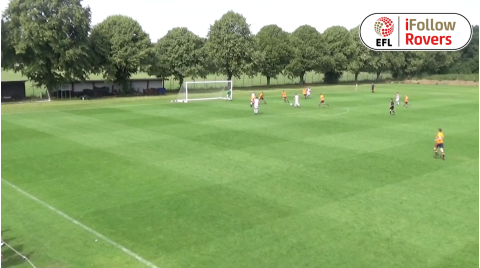 Rovers started brightly at Cantley Park and earned an early corner through Jack Watson who did very well to keep the ball upfield in a threatening position.

New captain AJ Greaves whipped the resulting corner into the box and the chance is headed over by the towering Foulkes.

Harry Robinson was allowed room down the left wing which resulted in a cross into the box which was neatly extinguished by home goalkeeper Dec Ogley.

Rovers took the lead just shy of the 10-minute mark as another great corner provided through skipper Graves was scrambled on the goal line, but Watson ws there to provide the clinical touch to take the ball into the back of McFarlane’s goal.

Oldham responded rapidly as they forced Ogley into a neat save with his legs as Max Norman pulled the trigger from close range.

The Latics pulled one back through an unstoppable strike from Declan Baldwin who from a far distance curled the ball into the top-right corner, leaving the stretching Ogley no chance of stopping.

Then came another flood of Rovers corners with the youngsters almost retaking the lead when Barnett’s shot was cleared off the line by an Oldham defender.

Stancliffe’s side retook the lead on the brink of half-time after Will McGowan fed off the scraps of Myron Gibbons’ initial shot, as he slotted home from close-distance.

Simon Cooper’s Oldham side then came out with a point to prove in the second-half, but Rovers withstood the pressure with Ogley making some important saves to keep the teams advantage.

Full-back Martin Smith Jr opened Oldham up with a sprint down the right-flank, leaving behind two defenders in the process, then played a ball across the face of goal but it landed straight at the feet of Latic defender who cleared his lines immediately.

Rovers extended their lead courtesy of Gibbons who tucked the ball into the back of the net from a tight angle from the near-left-hand post.