Joe Wright says it was a proud moment to score his first career goal in Rovers’ 3-0 win over Wycombe Wanderers. 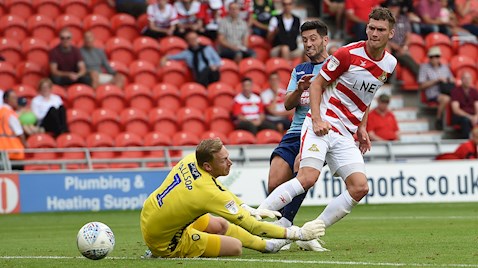 The defender’s composed finish helped secure back-to-back victories for Grant McCann’s side, and he believes they were in control from start to finish.

He said: “We were dominant for large spells of the game, we settled into it and once we went in front we managed to kick on.

“The lads have been giving me stick for not scoring, it was great to be able to finish it off and get my first goal.

“I’ve been working a lot with Cliff Byrne in training, I scored a similar goal in pre-season so it’s nice to see the work is paying off.”

Rovers defeated a Wycombe side who were unbeaten away from home in 2018, something Wright believes  shows the quality within the team.

He added: “We’re playing a different way and there is a lot more emphasis on us defending one-on-one which the manager has faith in us to do.

“It took a bit of getting used to but it’s enjoyable, we’ve adapted quickly and we know we can hurt teams on the counter-attack.

“We’ve got a lot of competition for places, and in particular in defence, Tom Anderson is waiting in the wings which keeps me on my toes.”

Rovers return to home action on Tuesday August 21, with Shrewsbury Town making the trip to the Keepmoat Stadium in Sky Bet League One. Tickets are still available via the Club Doncaster Box Office and you can purchase either in-store, by calling on 01302 762576, or online at tickets.clubdoncaster.co.uk.