Tom Anderson praised a complete performance from Rovers after they beat Bristol Rovers 4-0 at the Memorial Stadium. 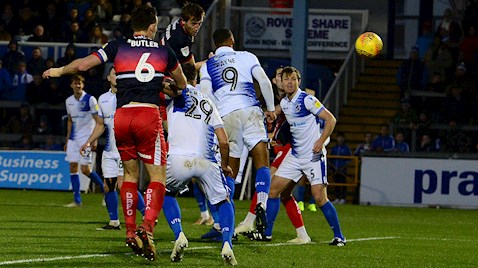 The central defender scored in the victory, adding to a double from Mallik Wilks and a stunner from John Marquis.

He said: "It was a very good performance, the conditions weren't great but we were strong with the ball and defended well without it.

"I actually prefer it when the pitch is a bit greasy, it means we can get the ball down and use it to our advantage.

"For my goal it was a great ball in from Herbie Kane, I managed to get into a good position and just had to guide it on target."

The clean sheet for Rovers was their fourth in the space of five games in all competitions, and Anderson has been impressed with their resilience at the back.

He added: "A few weeks ago we went through a bit of a tough time when we were conceding sloppy goals but we've learnt from that.

"At the time we knew we had to stick together as a team and keep working hard in training to make sure we improved.

"The win here could be a big one for us, it's the time of year where a few wins in a row can put you in a really good position."