There was little Christmas cheer for Rovers as they fell to a Boxing Day defeat at a clinical Fleetwood Town. 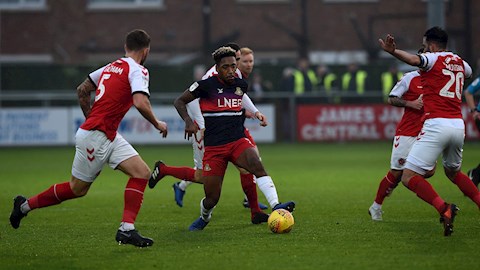 The visitors opened brightly, with Ali Crawford firing over in the opening minute and Danny Andrew shooting wide, but the home side took their lead with their first opportunity after 11 minutes when Paddy Madden headed home.

Rovers pushed for an equaliser, forcing home goalkeeper Alex Cairns into some good saves from an Ali Crawford free-kick and a James Coppinger drive.

And when Cairns was beaten his goal lived a charmed life - with a lofted Danny Andrew free-kick clipping off the inside of a post before being turned home by Andy Butler - only for the effort to be disallowed for offside.

But things got worse for Rovers early in the second period when Ched Evans pounced on a loose ball and set up Ash Hunter to double Fleetwood's advantage, and Madden added his second of the game in the closing stages.