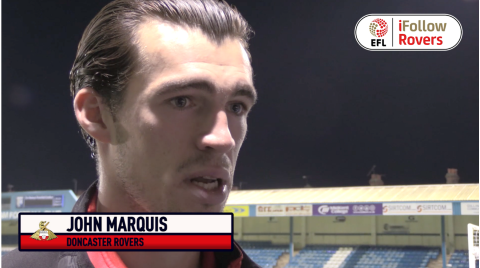 The No.9 scored the opening goal of the game after 28 minutes, and felt his side were good value for the three points.

He said: “We showed a great reaction from the Fleetwood game and showed what we’re about in attack and defence.

“We know we’ve got a lot of goals in the team, it’s about making sure we’re ruthless when we get into good areas. Ever since I’ve been at the club there haven’t been many times where we’ve had back-to-back defeats which shows the mentality we have.”

Marquis’ goal at Priestfield took him to 16 in all competitions this season, and he feels like there is still more to come.

He added: “Sometimes you need luck in front of goal and the ball has fallen for me quite a lot, it got a slight deflection but I’ll take that.

“I tend to score a lot in the second half of a season and that seems to be the way it’s gone throughout my career - 2018 has been a good year for me and I’ve scored a good amount of goals, and I feel I can keep improving and getting more chances.”