Manager Grant McCann said his team's ruthlessness in front of goal made the difference as Rovers earned the bragging rights over neighbours Scunthorpe United in Sky Bet League One. 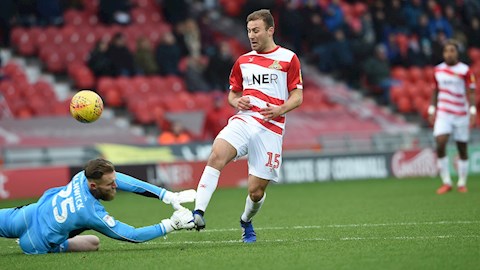 Rovers took the lead through a Ben Whiteman effort after six minutes and had doubled their advantage by the 10-minute mark thanks to a calm finish from Herbie Kane. The match was wrapped up in the second half when John Marquis scored his 12th league goal of the season to make the final score 3-0.

"I thought it was a scrappy game, but what we showed is when we're not at our best we can still win. That's the sign of a good team," said McCann.

"These derby games are all about making sure you take your chances and I felt we did that. Scunthorpe may even have had more chances than us, but we were clinical and I think that's the reason we got the win.

"We knew this was going to be a hard game. Scunthorpe are in a false position and I've got no doubt that they'll put a run together and will come flying up this league. They've got too many good players in that squad and I'm sure once Stuart McCall brings a few of his own players in, we'll see them fly up the league."

Whiteman's early goal stunned a Scunthorpe side who had suffered four defeats in a row heading into the match. The strike took a deflection en route to goal, but McCann felt there was no luck involved in any of his side's goals.

"We knew Scunthorpe concede goals from cutbacks and so we worked on that this week. Our analyst is very good and we knew a lot of their goals come from their left-hand side. The first one has done that and it's a cutback, so I was delighted for that to put us one-nil up," he added.

"The second one is an outstanding goal from Herbie Kane and that's what he's all about. His press, his aggression, and then his calmness to finish the chance. I was pleased for John Marquis too. He got his chance and he put it away as good strikers do.

"We want to try and improve our goal difference and we've done that in the past two games, with seven goals and none conceded in two very tricky games."