Manager Grant McCann praised his side's ruthlessness as they brushed aside Bristol Rovers to move back into the play-off positions. 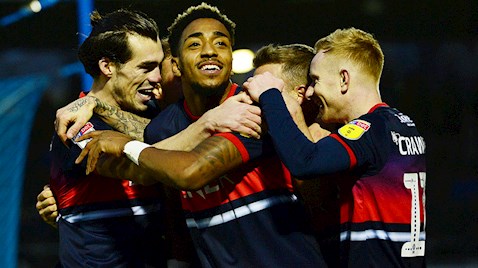 John Marquis opened the scoring after nine minutes, with Tom Anderson's header sandwiched between Mallik Wilks' brace for a 4-0 win on the road.

"We knew going into the game that this is a tough place to come but we've done very well, I know they're in a difficult patch at the minute, but I've seen the hard work that Darrell Clarke has put in over the past couple of years," said McCann.

"It was a really good performance from us and we were clinical. The first goal is a really great finish from John, and his good positioning in the box allowed the space to open up for Mallik who's managed to guide the ball in.

"The third one comes from a great bit of skill from Herbie Kane and it's a great header from Tom, but the most pleasing goal for me was the fourth, with Mallik on the break and he was really strong to keep hold of the ball."

Saturday's win over the Pirates saw Rovers move back into the League One play-off places, sitting sixth, and after three clean sheets on the bounce and a six-game unbeaten run, McCann says confidence is high in the camp.

"The clean sheets we've had recently are a credit to the whole team really, we defend from the front, the front three are always pushing and pressing, and that just makes the job a whole lot easier for Ian Lawlor and the back four," he added.

"That's three wins in a row for us now and we're on a great unbeaten run at the minute, there's a lot of confidence around the group at the minute, and we want to get those next couple of wins to get us back on target.

"We made four changes from last weekend's game at Charlton and we still looked very strong, I really am delighted with the professional performance from all the boys and we're obviously looking to take it into the next game now."