Rovers manager Grant McCann is hoping for a special 2019 after ending 2018 on a high with Saturday's 3-1 win at Gillingham. 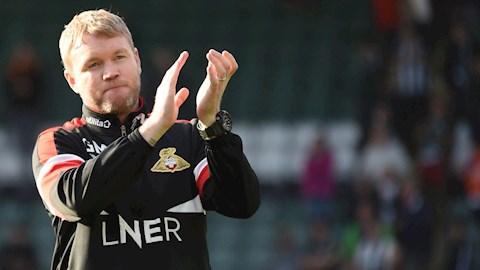 McCann ready for battle against Rochdale

He left London Road the following month, but after returning to football at the Keepmoat Stadium in June it has been a positive second half to the year for the Northern Irishman.

He said: "The start of the year for me personally was a bit up and down, but I'm at a great club now and I'm really enjoying it her. I want to do as well as I can for this football club and do it for the fans who have been brilliant all season,

"We're pleased with where we are at the minute, but we're always looking to do better and improve, we were disappointed to lose at Fleetwood, but we responded in the right way against Gillingham."

Rovers sit seventh in Sky Bet League One ahead of the visit of Rochdale on New Year's Day, and are in a strong position to push for a place in the end-of-season play-offs.

McCann added; "There's still a long way to go for us and we're taking it a game at a time, but we're in a good place. We're bringing people in, we'll get others back from injury and we'll get stronger, we just have to make sure we're up there at the business end of the season."