Rovers manager Grant McCann was pleased for Rieves Boocock after the 19-year-old made his Football League debut in injury time during Saturday's 3-1 win over Gillingham FC. 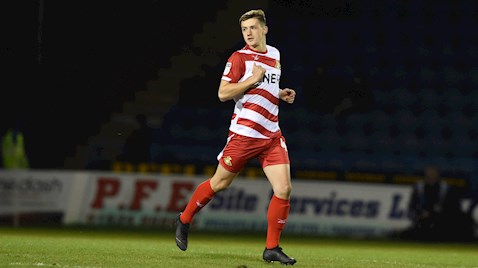 The young striker has been impressing for Rovers U18s with six goals in his past three appearances and McCann felt both Boocock and his U18s strike partner Myron Gibbons deserved their places in the matchday squad.

"I was pleased to see Rieves Boocock coming on and getting his debut. We gave him a round of applause in the changing room," said McCann.

"Rieves deserved his appearance, he's got nearly 20 goals for the youth team this season. I think he'll be on the phone to his parents and rightly so, making your Football League debut at 18 is what dreams are made of."

McCann added that the experience young players get from being involved with the first team on a matchday, particularly away from home, is invaluable.

"That experience is really important. We've got six or seven injuries so young Myron Gibbons and Rieves were on the bench and I was pleased to get a few of the youngsters on the pitch," he added.

"Rieves came to Fleetwood with us and he didn't get on the bench. Myron has been involved in a few of the friendly games at the beginning of the season and came on. It was good to get the two of them here with us."