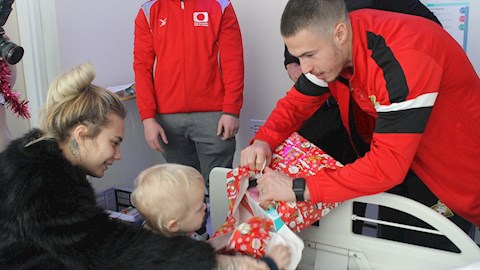 Club Doncaster kit supplier FBT donated 50 mini footballs and rubber ducks so one could be given to every child on the ward and Club Doncaster also donated a selection of FBT clothing for the children to enjoy.

After visiting the ward, the players met with the hospital’s medical director Sewa Singh to present him with two signed Rovers shirts donated by sponsor Eric Twiggs Food.

Blair said: “It’s difficult to see a child in hospital at any time but especially at Christmas and if a visit and a gift from us can put a smile on their face then it makes the visit worthwhile.

Butler added: “We’ve met some amazing children and their parents.  The footballs went down a storm with the kids, so we might have even inspired the next generation of players.

“I want to say thank you to the staff on the ward for the amazing work they do, for showing us around and for making the visit possible.”

Jane Morgan from the Hospital School said: “On behalf of the Trust I’d like to say a huge thank you to Doncaster Rovers and Club Doncaster Foundation for coming to the ward. It really does make Christmas that little bit more exciting for all the children here, especially when they are missing out on other festivities at school or at home. The chance to meet their sporting heroes is a special surprise which gives them a much-needed boost!”

The visit came in the same week as Rovers released their 2018/19 third kit which was designed conjunction with the NHS and mental health charity Calm.  The striking third shirt can be pre-ordered from December 17 and can be collected from January 4 2019.

Get your Half Season Membership now – online at tickets.clubdoncaster.co.uk, at the Club Doncaster Box Office in person or via telephone 01302 762576.