Junior Rovers fans had the experience of a lifetime when they got to take on their heroes on the Keepmoat Stadium pitch. 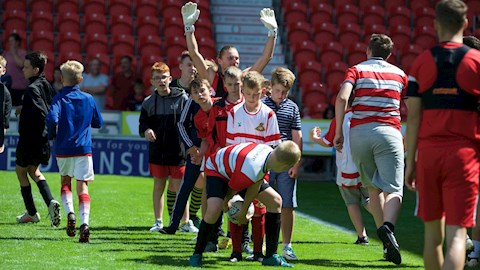 More than 80 young fans were given the opportunity as the highlight of Saturday's open day, which saw a range of exciting activities.

Rovers marketing manager Mark Hughesman said: "Our open days here at the Keepmoat Stadium are a great way for our fans to meet and greet their favourite players.

"For our junior members, the chance to train with and play against their idols on the pitch itself is a rare opportunity and one we know our young visitors love.

Visitors were greeted by an inflatable go-kart track outside the East Stand before joining Donny Dog in his kennel for face-painting, colouring and gaming fun.

Doncaster's newest trampoline park, Flip Out, came along to meet junior members and families and hand out goodies for all.

The Rovers first team squad held a training session on the main pitch followed by the moment all the registered junior members in attendance had been waiting for – the chance to join their idols on the turf for their own training session and kickabout.

Split into three age groups the youngsters were given a teamtalk in the home changing rooms by Rovers head of academy, Kieran Scarff, before heading through the tunnel onto the pitch itself.

After putting the kids through their paces, the first team lined up for a signing session while fans were addressed by first team coach Grant McCann who spoke about his plans for the new season.

Youngsters from five to 16 can have the chance to be a matchday mascot and receive a signed birthday card, attend exclusive events and parties as well as saving £3 on match tickets by joining either Donny's Squad or Red Squad – Rovers' free to join junior membership scheme – find out more and sign up here.

Rovers will next be in action at the Keepmoat Stadium on Saturday August 11 when they take on Wycombe Wanderers in their first home game of the 2018/19 Sky Bet League One season. Click here to purchase your ticket or call the Box Office on 01302 762576.