Players and staff of Doncaster Rovers have thrown their weight behind the campaign to bring the 2021 Rugby League World Cup to the Keepmoat Stadium.

Staff of Club Doncaster have been working alongside people from Doncaster Council, Business Doncaster and Visit Doncaster in a bid to host parts of what will be the biggest World Cup in rugby league’s history.

Players and staff recorded a video to show their backing for the bid, which is being submitted on Tuesday.

Rovers manager Grant McCann said: “The facilities at the Keepmoat Stadium are fantastic, and would be ideal to host an event such as the Rugby League World Cup.

“The people of Doncaster have shown their passion for sport, not just in backing Rovers and the Dons but in coming down to watch the Challenge Cup semi-finals and England internationals.” 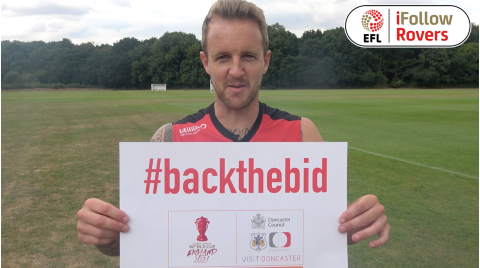 Rovers chief executive Gavin Baldwin said: “Dons chief executive Carl Hall and the team have done a great job in pulling the bid together, it has been a real community effort which everyone involved can take a lot of pride in.

“This kind of bid shows the benefits Club Doncaster is trying to bring to the area, the support we have been able to give Carl on this is precisely because we are able to work together as one team and bring bigger and better events to the town. Our track record speaks for itself.

“The team behind the bid have done a brilliant job, and can be proud of the efforts they have made in trying to bring such a big international event to our town.”

Rovers kick-off their Sky Bet League One campaign at Southend United on Saturday August 4, before their first home outing against Wycombe Wanderers the following Saturday.

The most cost-effective way to ensure you don’t miss a minute is via a Season Membership. You can buy in person from the Club Doncaster Box Office, by calling 01302 762576 or going to tickets.clubdoncaster.co.uk.