Bradford City inflicted Rovers’ first league defeat of the season as they came from a goal down to win 3-1 against Paul Stancliffe’s high-flyers. 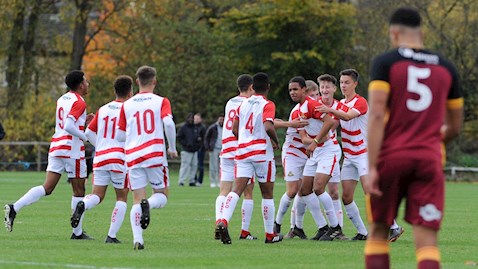 Within seven minutes of the first-half starting Myron Gibbons had skipped down Rovers’ right-side and played a low ball into the area where Martijn Smith was able to latch onto the ball to give his side the lead.

Declan Ogley, on his return from injury, was forced to keep his side in the game as he made his first save as Adams struck from close range.

Cameron Barnett forced City’s goalkeeper Alfie Darke into a save after firing low from distance.

Rovers’ top goal scorer Rieves Boocock then had two quick-fire shots on goal with the first one being blocked and second saved by Darke.

Ogley produced a double save down the other end of the pitch when Bradford worked a corner into the box.

In the second-half it took only two-minutes for Bradford to forge their way back into the game, when Jorge Sikora nodded home from a well-worked corner routine.

The Bantams duplicated this routine later to turn the game completely around, this time it was Kielen Adams who headed home.

Their third corner of the second-half was flicked across goal by Raeeoe Ellington, but Rovers managed to clear their lines this time.

Gibbons had a chance to pull the game back level moments later, but Darke made himself big to deny the young Rovers striker.

Bradford striker Ellington came close to adding a third late on, but Ogley was there to make another save and keep his side in the affair.

But the hosts eventually wrapped-up the three points as substitute Connor Shanks bundled his effort home.