Herbie Kane says his Rovers teammates need to maintain belief in themselves that they can go on and win games even if they concede first. 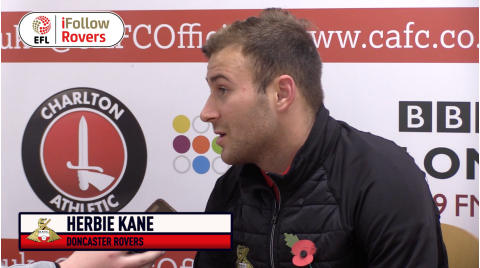 Rovers fell to a 2-0 loss at Charlton Athletic on Saturday, but midfielder Kane reckons Rovers could have got something out of the game.

"We knew we'd need to try and bring it back after the break, we upped our work effort, but we just couldn't break them down - it's disappointing because we need to believe that even when we do go 2-0 down, we can still get something out of it," he said.

"We know we need to be starting games better than how we have done in recent weeks, it all boils down to concentration. When we get the first goal, we show we can go on and score one or two more, but the simple thing is we need to start better."

Rovers were two goals down at the break for the second game in a row, despite a bright start to the game for the visitors which saw Niall Mason and Kane both go close with early chances.

"We're disappointed that the results didn't go our way, I thought that we controlled the game right up until their first goal - we had some many chances to take the lead early on, but it just doesn't seem to be going our way at the minute," he added.

"After the first goal went in, it seemed like we lost the belief we had built up early on, and I think it showed. You need to have that if you want to win games and it just wasn't our day."

Rovers fans can kick off 2019 with huge savings on fixtures including Barnsley, Peterborough, Accrington Stanley and Charlton at the Keepmoat Stadium. The new Half Season Membership package gives you access to all remaining Doncaster Rovers home games this season from January 1, and costs as little as £165 – making each seat just £15 for a full paying adult in category C seating. Buy online now at tickets.clubdoncaster.co.uk , at the Club Doncaster Box Office in person or via telephone on 01302 762 576.