Grant McCann hopes the win over AFC Wimbledon will give his side belief as they look to capitalise on a run of home fixtures. 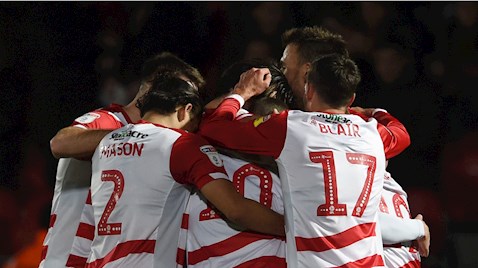 The Rovers boss saw the six Sky Bet League One games running up to Christmas as a great chance to get some points on the board, with four of those coming at the Keepmoat Stadium. Saturday's 2-1 victory kicked off that run.

He said: "Hopefully it is a turning point in our season, we want to take advantage of having four games out of six at home and have started well.

"We just needed the three points to give the boys a bit more confidence, a little spring in their steps. You could see the relief around the stadium when the goal went in. I don't think Wimbledon threatened as much in the second half, we were in control without creating as many chances as we have in recent games."

Simon Bassey took charge of AFC Wimbledon following the departure of Neal Eardley earlier in the week, and McCann praised his side's resilience against a determined and physical side.

He added: "We knew it was going to be a tough team when we saw their team, they brought a lot of experienced players back in - people like Liam Trotter and Tom Soares have been about and know this league.

"It was all about sticking to our task and getting three points. They are a big team and have people who work hard, and it can be difficult to break that down.

"The way we play, some teams will sit in. Fortunately the skipper's come on and found a bit of space to get three points."

Tickets for Tuesday's Emirates FA Cup first round replay against Chorley are still available via the Club Doncaster Box Office. Purchase yours now by either visiting in store at the Keepmoat Stadium, by calling on 01302 762576, or online at tickets.clubdoncaster.co.uk.