Tommy Rowe is keen not to push himself too quickly as he makes his comeback from a hamstring injury. 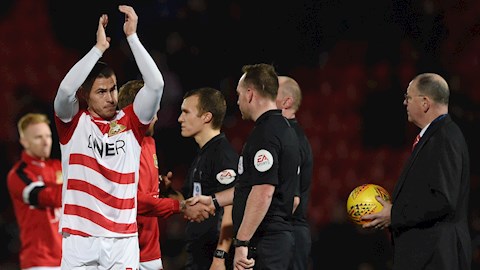 Rowe delighted with return against Wimbledon

The Rovers captain marked his return to action with the winning goal against AFC Wimbledon on Saturday, but will resist the temptation to push for an immediate return to the starting line-up.

He said: "It's important to be steady with it, these injuries can take a bit of time to solve and even when you think you're back you have to be patient. Physio Joe Sharp, fitness coach Rob Lee and the gaffer have had to manage me well.

"As long as I listen to them and take their advice I should be in the clear, and hopefully in the next few weeks you'll see more of me. It's great I made an impact, but we've got to be realistic and stick to the plan. You can look and feel fit, but football has a funny way of turning its back on you and I'm not going to fall for that again."

The 10-week spell on the sidelines has been frustrating for the midfielder, and he is determined to make a real impact as we head into the second half of the season.

He said: "I spent a lot of time doing iFollow Rovers commentary which is fun, just analysing the game, but it's frustrating not being on the pitch. Ive played quite a lot of games in a short time for Rovers, and it's all I've known in my careerm I've loved it and we've had a lot of success with it.

"It's great I made an impact, but we've got to be realistic and stick to the plan. You can look and feel fit, but football has a funny way of turning its back on you and I'm not going to fall for that again.

"If we manage it properly I can be the player that I have been for the club over the past two-and-a-half years, to go into the new year and play consistently at a high level. I have complete faith in the team around me."

Tickets for Tuesday's Emirates FA Cup first round replay against Chorley are still available via the Club Doncaster Box Office. Purchase yours now by either visiting in store at the Keepmoat Stadium, by calling on 01302 762576, or online at tickets.clubdoncaster.co.uk.