Tommy Rowe marked his return from injury with the winning goal as Rovers came from behind to seal three points against AFC Wimbledon. 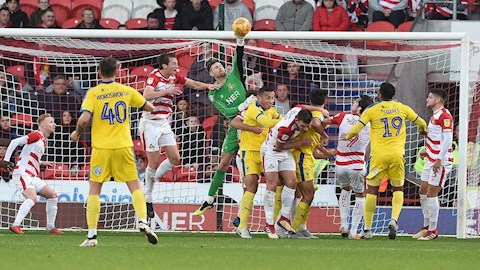 Rowe's piledriver built on a stunning strike from Ali Crawford and earned Grant McCann's side a deserved three points after Mitch Pinnock had put the Dons in front.

Rovers had the first chance, with Alfie May inches away from connecting with Danny Andrew's low cross.

Another Andrew cross almost proved to be the Dons' undoing a minute later, with Herbie Kane this time on the end of one, only to see his deflected effort strike John Marquis.

It would be the visitors who took the lead, somewhat against the run of play, with Liam Trotter's through ball slicing open the Rovers defence.

Mitch Pinnock picked the ball up and slotted past Ian Lawlor to put the Dons in front after 26 minutes.

This did not set Rovers back, though, and it would be a moment of magic from Crawford that would get them back level 10 minutes later.

He collected the ball after a pass by Ben Whiteman to the Scottish midfielder, and he took it round one defender, before curling an absolute beauty of a shot into the top right corner from 25 yards out, leaving Joe McDonnell in the Dons goal with no chance.

After the break, it would be Rovers who would remain in control, with Andrew first to try his luck from distance, however his left footed drive was inches past the far post.

Another burst down the left from Kane almost went rewarded on the hour mark as he pulled the ball back for Marquis, only for the striker to see McDonnell equal to his effort.

Wimbledon then gave Rovers a scare as Scott Wagstaff saw his effort deflected and with Lawlor scrambling to get the ball away from the line, Kwesi Appiah was denied at the last second by the Irishman before he could poke home.

With the game ticking towards the 90-minute mark though, it would be a moment of brilliance from the returning Rovers captain Rowe which would see them take the lead.

He collected the ball in the middle of the park and weaved his way through before shooting into the far corner from 20 yards out to give his side a deserved lead.

May went close with the last kick of the game as he fired just past the post following Marquis' pull back, but it wouldn't matter as Rovers collected their first win in seven games in all competitions.

They will look to add to their win when they host National League North side Chorley in an FA Cup first round replay on Tuesday night at the Keepmoat Stadium.