Grant McCann felt his side were made to pay for a below-par first-half performance in the defeat to Coventry City. 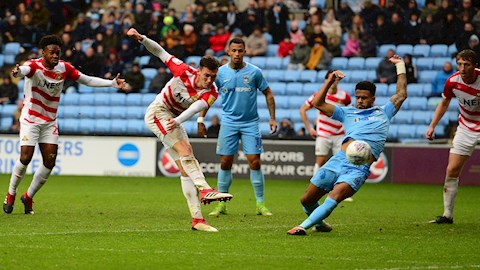 Joe Wright’s goal was not enough as Rovers went down 2-1 at the Ricoh Arena, and McCann believes they needed to start better.

He said: “The result hurts, our first-half performance wasn’t good enough. After half-time we were very good and had a lot of the ball, but we couldn’t find the leveller once we’d got back into it.

“When you start games like we did and give teams a two-goal lead then it is always going to be difficult.”

Substitute Paul Taylor came on and had an immediate impact as he provided the assist for Wright’s goal, and McCann says he has put himself in the frame for a first league start for the club.

He added: “We changed the system and I think it was effective, we went to a diamond and got our full-backs a lot higher up the pitch.

“They dropped deeper so we brought Paul Taylor on to try and create things, and I thought he played well. He’s very close to the starting line-up, we need consistency in the team and he’s put himself in my thoughts with a good performance.”

Rovers return to the Keepmoat Stadium to take on AFC Wimbledon on Saturday November 17, with tickets available from tickets.clubdoncaster.co.uk