Rovers' U18 side extended their unbeaten run to 14 games as they had to settle for a point in their clash against Chesterfield U18s at Cantley Park. 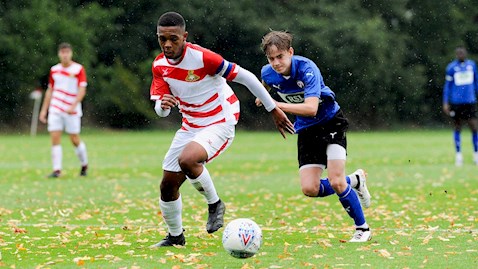 Rovers applied a lot of pressure down Chesterfield's left in the opening period, with Myron Gibbons giving the north Derbyshire side the runaround.

Debutant keeper Easen pulled out an impressive double save after the Spireites constructed a quick-fire on attack on Rovers' goal – this turned out to be their only real threat on goal.

Rovers almost took the lead shortly after through Rieves Boocock, after Elliott Walker provided a good low cross into the box.

An alert Rovers counter from a corner, with Gibbons making a good run down the left-flank, followed, but his resulting shot ended up spiralling over.

Cameron Barnett showed great strength as he kept ball in play down the right touchline, then floated the ball into the box where Branden Horton hacked the ball over the bar.

Full-back Walker almost pulled off what could have been a stunning goal, as he curled a shot towards the top left-corner from just over 20-yards out.

Substitute Jack Watson came on to liven Rovers' attack up even more, he set up penetrating one attack from around the half-way line, making an outstanding run, before laying the ball off to Gibbons who ended up winning a corner.

The home side continued to apply plenty of pressure on Chesterfield's goal and, after Rovers had headed wide from a corner, a similar opportunity arose from the second corner kick, which saw Horton head towards goal, only for it to be tipped behind.

A late hat-trick of consecutive corners prompted a chance where Horton's header was tipped behind, while Easen had to be alert as the visitors headed wide from a set-piece.

Stancliffe's men were left disappointed with just the one point, but after bagging their first clean sheet of the season an extending the unbeaten streak they can hold their heads up high.