Paul Stancliffe wants to see a reaction from his U18 side after their 14-game unbeaten run came to an end in a dramatic cup loss to Lincoln City. 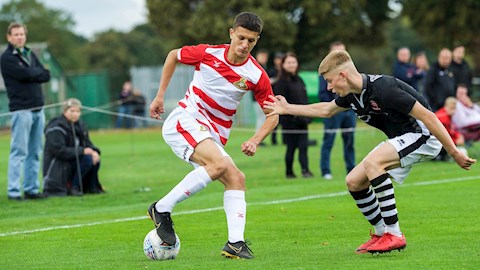 Rieves Boocock netted a hat-trick at Cantley Park, the third a particularly impressive long-range effort, but the visitors forced home a late winner in the EFL Youth alliance Cup game.

Stancliffe said: “I’ve said to them if you go that many games unbeaten then everybody wants your head – you only had to see the Lincoln players’ reaction after the game, you would have thought they won the cup because they’re the first team to beat us in 15 games.

“That’s what these runs bring, but you’ve got to be big enough and brave enough to deal with these threats and we have been apart from the first 45-minutes in this match. They’ll be fine, and they’ll pick themselves up.”

The U18s boss backs his youthful side to pick themselves up after a frustrating day at the office, praising their strong characters and mentality.

He added: “It all went wrong in the first-half, quite simply we didn’t work hard enough to stop them delivering balls forward – it’s a team effort and you have to say, information wasn’t being passed on between them as teammates from the back to the front. We didn’t work as hard either, so we didn’t see much of the ball.

“It’s a defeat and the lads are feeling it because it’s the first one in 14 games and sooner or later it was going to happen – we have to react in the correct manner.

“The lads have been great all season and I’ve said a few times they are a great bunch and it’s up to them now, it’s a learning curve and they’ve got to react.”