Paul Stancliffe has praised Hartlepool after his Rovers' side conceded a late goal in the North East Division. 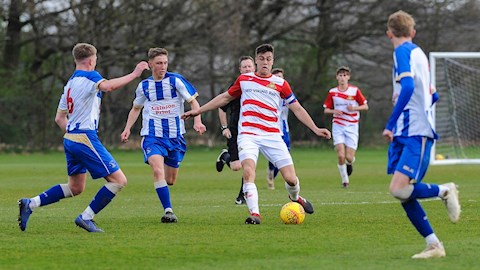 Title rivals Hartlepool nicked three points from under Rovers’ noses on Saturday who were made to pay for not taking their chances and Stancliffe believes the result was fair.

“I don’t think we can argue with the fact that today Hartlepool were the better team – they deserved the win. It makes it more difficult to process right now because it happened so late on in the game, but overall I thought they were the better team, we just weren’t at the races today,” he said.

“I don’t know if they were nervous – they did look it in the warm-up – but it was a bigger game against Grimsby last week and they responded brilliantly to that. They have and paid the price here, and we can’t make any excuses for that.

“We brought the U16s in, but we expect the same standard as always especially because they’ll be playing for us next year. I don’t think there is any complacency after last week’s result because they certainly didn’t show that in training throughout the week.”

This week the club confirmed that quartet Branden Horton, AJ Greaves, Myron Gibbons and Rieves Boocock all signed professional deals. Meanwhile 16-year-old Lirak Hasani has made his debut for the first-team after coming off the bench against Luton Town.

“I’m delighted for them. Rieves has goals in him, Myron’s always a threat and AJ and Branden always play well so it’s very good and as well as being pleased for them, there’s also the disappointment for the boys that haven’t got one. They’ve given everything and have a lot to be proud of,” Stancliffe added.

“It was brilliant for Lirak and the club all the way through. People can see that whoever the manager is that we’ve had over the years they always back the academy and we’ve got that in the gaffer now too.

“He’s prepared to put them in, it doesn’t matter about their age, and that is very pleasing for me and my staff.”