Defender Paul Downing says Rovers' only focus is themselves as they head into the final three games of the regular season knowing their fate is in their own hands. 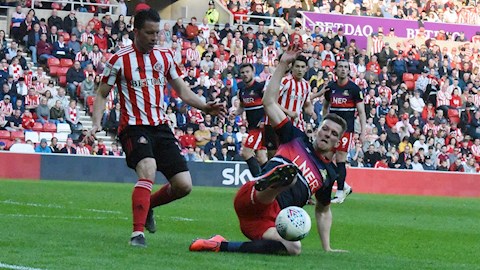 Rovers hold a four-point advantage over Peterborough United in the battle for the final Sky Bet League One play-off spot, with home games against Accrington Stanley and Coventry City sandwiching a trip to Oxford United.

"There are a lot of twists and turns, lots of points to play for and we just have to concentrate on ourselves," said Downing.

"We know if we win our games, we finish in the top six, so it's a big final push now over these two weeks to make sure we give it our all and have no regrets."

Rovers' four-game winning run was ended with a 2-0 loss at an impressive Sunderland side on Friday, and Downing says the Black Cats were among the best sides Rovers have faced this season.

"That is the standard you need to be at to be in the automatic places, Sunderland have set the standard along with Luton," added the centre-back.

"And if we finish in the play-offs, which we want to do and believe we can do, and if we're going to come to stadiums like this then we know we need to put in a better performance."

Tickets for Rovers' next Sky Bet League One home game against Accrington Stanley on Tuesday April 23 are still available via the Club Doncaster Box Office. Purchase yours now by either visiting the Keepmoat Stadium, by calling on 01302 762576, or online at tickets.clubdoncaster.co.uk.