Paul Downing says Rovers must lay it all on the line so they can finish the season with no regrets. 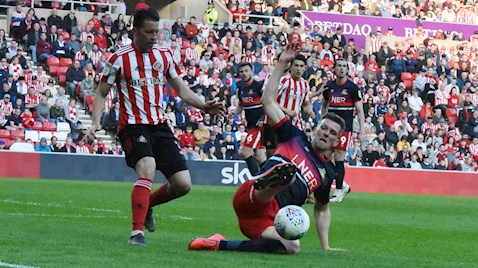 Rovers host Accrington Stanley on Tuesday evening looking to bounce back quickly from Friday's 2-0 loss at Sunderland, but still with plenty of confidence after four straight wins prior to the trip to the Stadium of Light.

Downing said: "We'll concentrate on Tuesday now and make sure we bounce back. We'll get the home fans behind us and we're confident at home, and we'll back ourselves to get the three points.

"We've got a good group in the changing room with a lot of knowhow in there, and we believe we can get over the finish line."

Two first-half goals were enough to prevent Rovers from claiming an upset at the Stadium of Light against a team still fighting for automatic promotion on Friday.

Downing felt Rovers were made to pay for a below-par opening period, but expects a reaction on Tuesday.

He added: "We came out of the blocks too slowly in the first-half and we were second to the ball, we're disappointed that we didn't show the form we've had in the past four games.

"We gave it a better go in the second half, but we can play a lot better than that. We've looked pretty strong defensively in these past couple of matches which gives us a basis to attack and create chances, so we'll get back on the training ground and try and keep a clean sheet on Tuesday."

Tickets for Rovers' next Sky Bet League One home game against Accrington Stanley on Tuesday April 23 are still available via the Club Doncaster Box Office. Purchase yours now by either visiting the Keepmoat Stadium, by calling on 01302 762576, or online at tickets.clubdoncaster.co.uk.