Rovers U18 rise to the top of the Youth Alliance league with a comprehensive 3-0 victory over title-rivals Grimsby Town. 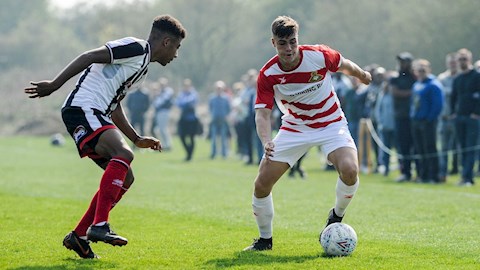 Rieves Boocock bagged a hat-trick as Rovers cruised to victory away at Cheapside Training Ground. Two first half goals set-up a comfortable afternoon for the young Rovers side while the second half gave Boocock a chance to claim a hat-trick and his 24th goal in the current campaign.

Boocock’s first came from a Rovers corner which Grimsby failed to deal with. The ball ricocheted around the six-yard box and was finally toed over the line by the young striker.

The second came as Rovers turned defence into attack with a long ball hooked forward beyond the Mariners defence, Boocock reacted first, held off his man and finished calmly beyond ‘keeper Hugo Banks.

Myron Gibbons turned on the afterburners for the third, he rode two challenges before using his pace to breeze past the final defender and play a perfectly weighted pass towards the back post. Boocock controlled the ball and half-volleyed it beyond Banks to seal his hat-trick and the win.

Victory puts Rovers one point ahead of Grimsby Town U18s with a game in hand. Rovers have four games remaining starting with Hartlepool United at home on April 6 2019. (11am kick-off)

Get cheaper tickets with Rovers 5 and 10 tickets package deals. You can make big savings by purchasing tickets as a group. More information can be found here.

Tickets can be purchased at tickets.clubdoncaster.co.uk