Manager Grant McCann praised his side's character after a vital point on the road at Oxford United on Saturday. 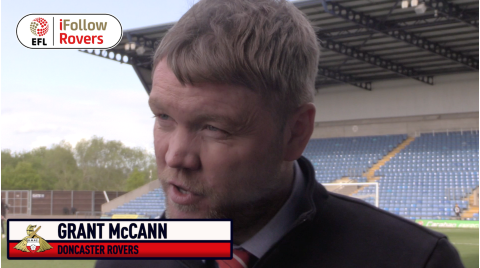 Rovers strengthened their position in the race for the final Sky Bet League One play-off place, with John Marquis and a Nico Jones own-goal helping McCann's men to a 2-2 draw at the Kassam Stadium.

"We're all still calm, I think the boys were fairly calm before the game, and I thought we showed tremendous character here, Oxford isn't an easy place to come and the wind hasn't been great, but we dealt with it very well," he said.

"The first half was a bit difficult as we were playing with the wind and it didn't make it easy for us to put balls into the box or to feet, but credit to the boys for the first goal which was a great ball in from Mallik Wilks and a lovely header from John.

"To respond like we did from going 2-1 down was superb: we needed to be strong as Oxford are the form team in the division and they always looked dangerous, but on the whole we dealt with them well."

Rovers now face Coventry City on the final day of the regular season at the Keepmoat Stadium looking for three points that would confirm a top-six finish, and McCann says he is not bothered by results elsewhere - with the focus solely on his side and what they do.

"On the whole, we've been very good this season, there's only been a small number of games where we haven't been ourselves, but here we showed a real steel about us and made sure if we weren't going to win we didn't lose it and that's a lot of credit to the boys," he added.

"It's always difficult at this stage of the season, some teams aren't playing for much so they can play with a lot more freedom, a bit like Oxford here.

It is your last chance to back Rovers at home in the league. Get behind the team for the final time in the play-off push when we host Coventry City on Saturday May 4. Tickets available from the Club Doncaster Box Office, online here (tickets.clubdoncaster.co.uk) or by calling 01302 762 576.