New signing Niall Ennis has said the reception he received from the Rovers faithful during 1-1 draw with Gillingham in Sky Bet League One made him feel immediately welcomed. 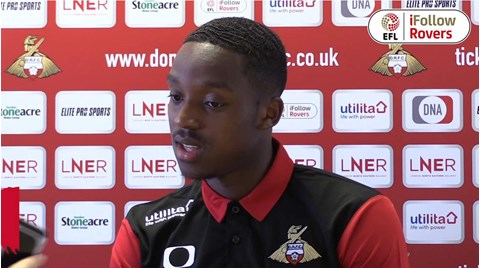 4 August 2019
Ennis, who signed on loan from Wolves alongside Cameron John on Friday, made his Rovers debut in the second half of Saturday’s opening-day fixture.
“It’s always good to start the season in front of your own fans, I’ve only just arrived really but I felt like the fans gave me a great welcome which I’m really pleased to see - now I’m really looking forward to the rest of the season,” he said.
“It makes it a little bit easier having Cameron up here with me, but the players and the fans have made me feel welcome already.
“They finished sixth here last year and I’m looking for more of the same, or even better would be great, I just want to help the team win games and see where we go.”
Ennis is on a season-long loan from the Premier League side and he cited manager Darren Moore as being a big influence on his decision to switch the West Midlands for South Yorkshire.
“I found out that I was wanted here about a week ago, and as soon as I heard Darren Moore was interested it was a no-brainer for me and I just wanted to come here,” he added.
“The manager wants to play good football and I think this is the right move for me, hopefully it’ll be a great club for me to show off my abilities and show everyone just what I can do here, I want to come here and score goals and bring a winning mentality.
“The gaffer has said he sees a lot of potential in me and this is the place to help me show it, hopefully this move can work for the both of us, I like to work hard, get the ball and try and  run in behind, and I like to get the fans off their feet and hopefully I can do that here.”
Season Memberships are still available via the Club Doncaster Box Office - purchase yours now by either visiting in store at the Keepmoat Stadium, by calling on 01302 762576 or online at tickets.clubdoncaster.co.uk.