Cameron John says he is happy to help out wherever he can on the pitch after he scored late on to help Rovers grab a point in Sky Bet League One. 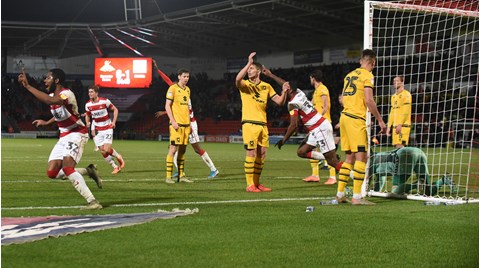 8 December 2019
The centre-back bundled the ball home five minutes from time to ensure Rovers came away from their home clash with MK Dons with something to show for their efforts after a 1-1 draw at the Keepmoat Stadium, and he was happy to mark his return to league action with a goal.
“It was a good feeling to be back on the scoresheet, it was a bit of a messy goal but sometimes you need goals that are scrappy like that - for me it was good to be back playing in the league and getting a goal,” he said.
“I didn’t score any last season so I’m not quite sure where these goals have come from to be honest, it feels nice though to chip in and help the team - no matter whether it’s up front or defending I’m always happy to help.”
Saturday saw John complete a second 90 minutes on his return from a recent injury, and the defender on loan from Premier League side Wolves hopes the fighting spirit shown by Rovers can help them push on as they head into a busy festive period.
“It was nice for me to be playing in the league once again and you could say that the goal was some sort of reward, we wanted the win more importantly though, but it’s something to build on and we can kick on from that next week,” he said.
“We especially didn’t want to lose at home so getting a point was something for us to have a hold of, we kept going until the end and that’s what we always do at home, we never give up and we always believe we’re going to score.”