Darren Moore felt his side earned a deserved point after coming from behind to draw 1-1 with MK Dons to round off a busy week. 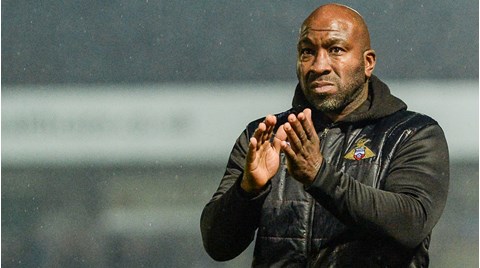 8 December 2019
Cameron John’s late leveller secured a share of the spoils for Rovers, and the manager says it was warranted based on chances created.
He said: “When you look at the stats we had seven shots on target so we felt in terms of the overall play we deserved at least a point.
“It’s our third game at the end of a tough week so it was good to not go home empty handed after going a goal down.
“It was a good footballing match and I think both teams will come away from it having deserved to take something from the game.”
Having faced three tiring games inside seven days, starting with a long trip to Gillingham on Sunday followed by the game against Leicester City U21s on Wednesday then the visit of MK Dons, Moore believes his squad showed good resilience to not be beaten.
He added: “We’ve had a quick turnaround and used our squad, but we’re missing players through injury and suspension so could not rotate as much as maybe I'd have liked.
“MK Dons are a team who have had a tough start but they battled with us, we had chances but so did they.”