Darren Moore had no complaints with the result after Rovers were beaten 2-1 by Sunderland in Sky Bet League One.

Jon Taylor’s goal wasn’t enough for Moore’s side to take anything from the game, and the manager felt the best team won. 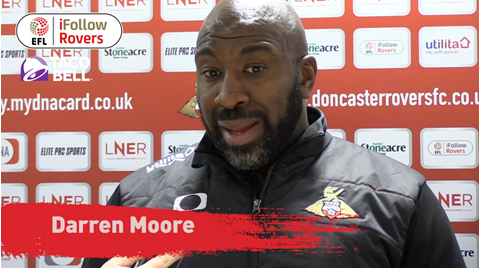 He said: “I thought the boys put a lot into the game, the smaller details were probably the ones which lost us it in the end.

“We stayed in the game at 1-0 and got back into it with a really good goal from Jon Taylor which was pleasing.

“I thought the second-half was even with the only difference being that they took their chance when it came along.”

With another game coming up against Oxford United on New Year’s Day, Moore says the players will have to recover quickly.

He added: “We’ll look at the availability of the squad and manage their recovery ahead of the game against Oxford.

“We can make a decision once we know more but with such a short turnaround, we have to manage the bodies.

“It’s difficult to do much work on the training pitch because they have to rest and analyse more than anything.”