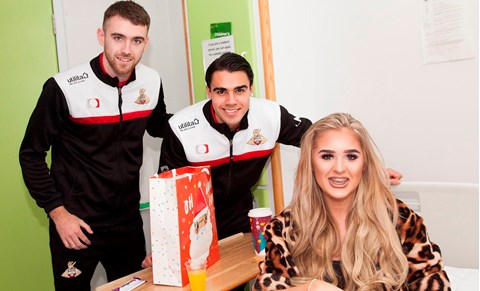 18 December 2019
The annual Club Doncaster Christmas visit took place on Monday, with players from all three of the organisation's teams visiting the women's and children's ward.
Ben said: “It’s a special time of the year with Christmas approaching, it’s always nice to go out and see Doncaster people of all different backgrounds who are going through illness and operations and it’s nice to cheer them up for a bit.
"It’s a nice time of the year but sometimes it’s very difficult for people who are ill or going through operations. It’s nice to cheer them up a little bit.”
The Rovers players were joined by Belles players Tori Thomas and Emily Burgin, as well as Jason Tali and Kieron Lawton from the Dons.
Hospital school teacher Claire Riley added: “It’s a time of year where it’s so hard for parents and children, being in hospital, so they really do appreciate having the visit.
“It brightens up what can be a really stressful time so we really appreciate it. They’ve been coming for some years now and every year it’s lovely to see the children so happy.
“It takes their minds off what is happening and it’s the same with the parents too, even if they’ve got young babies it brightens up their day too.
“We really appreciate everything that Club Doncaster has done over the past few years in coming and visiting us at Christmas."
The players handed out gifts donated by Club Doncaster's Official Partners at a recent networking event held at Doncaster Racecourse.
They also handed over a signed Rovers shirt donated by Official Partner Eric Twigg Foods. For more details about becoming a Club Doncaster Official Partner call 01302 764665 or email commercial@clubdoncaster.co.uk.