Goals from Nathan Dimou and Junior Smith were not enough to spark a fightback as Rovers’ U18 side were made to pay for a slow start against Scunthorpe United. 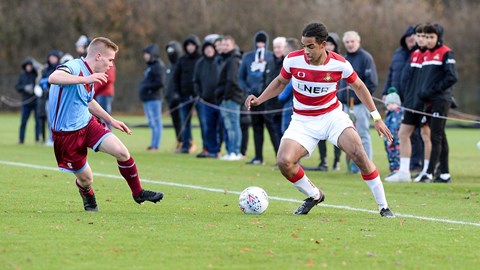 16 December 2019
Joey Dawson put the Iron ahead and Harry Jessop doubled their advantage. Dimou forced the ball in from a free-kick to give Paul Stancliffe’s side hope, but Jessop struck again to end realistic hopes of a fightback meaning Smith’s late header was a mere consolation.
Rovers played into driving rain and wind in the first half, with the best Rovers opportunity falling to Jack Watson who could not get his effort on target under pressure from Harry Baker.
Goalkeeper Ben Bottomley kept the score level with a great close-range stop from Jessop’s flicked header.
A quick counter saw Rovers switch play quickly with Watson finding Smith - the winger cut inside onto his left foot but his shot took a deflection which took the sting out of it and meant it was easy for Tom Collins to collect.
Bottomley could do nothing to stop the young Iron side from going ahead after 35 minutes, with Dawson smashing home a powerful effort from just inside the area.
Rovers found their feet a little more as the half drew to a close, with Smith having an effort blocked and the visiting keeper Collins doing well to stop a Ben Blythe effort after he connected with a deep corner.
Coach Stancliffe made one change at the break, bringing Luca Nelson on for Owan Derratt.
The conditions calmed for the second period, with an Aidan Train block denying Watson after the No.9 had been played through by Blythe.
The visitors doubled their lead after 55 minutes, with Jessop clinically finishing a counter-attack move with a low drive into a far corner.
Rovers enjoyed plenty of the ball as they pushed to get back into the game, with a deep Blythe free-kick causing problems in the area and Dimou turning the ball home after Collins could not collect it.
That gave the youngsters hope, with Smith and Watson causing problems, but a counter-attack saw Jessop re-establish the two-goal cushion.
Smith powered home a header from a Will McGowan corner to give his side hope, and there was a late opportunity to snatch a point when McGowan fired narrowly over with a free-kick.