Ali Crawford says Rovers are determined to cement their place in the play-off places - starting with Saturday's derby at Scunthorpe United. 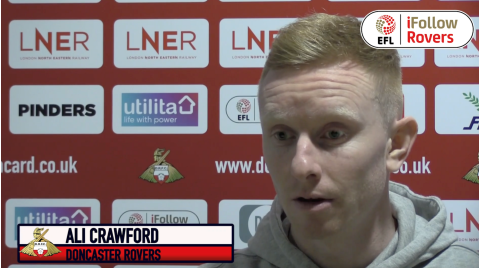 Rovers will be looking to make it three Sky Bet League One wins in a row when they face lthe Iron in an early kick-off on Saturday.

“We’re fully focused on the match, it’s a local derby so we don’t need any more motivation,” said Crawford.

“If we play the way we’ve played in our recent league matches, we’ll have a good chance of claiming three points. I don’t think we lost any form due to the FA Cup, we just came up against a better side in Crystal Palace.

“We’ve got ourselves into a good position but we’ve got 15 cup finals, we take it game by game but the aim has to be to win all 15 but we know that will be tough.”

Rovers have played the Iron twice in the current campaign claiming victory on both occasions, but Crawford says he expects a tougher test on this occasion.

“When we played Scunthorpe last time, they were close to the bottom of the league and now they’re mid-table, so they’ve been doing well and we know it’s going to be a tough game, tougher than the game we had here before Christmas,” he added.

“Early in the season in the Carabao Cup we brought a great attendance and it sounds like it will be the same on Saturday. It’s great when the fans are right behind us and if they turn out in their numbers again then hopefully, we can give them a good positive result for them to take home.

“The atmosphere at the Keepmoat Stadium on Sunday was great and that’s something that we’d like for the remaining games.”

Rovers are back in action at the Keepmoat Stadium on Saturday March 2 when they host play-off rivals Charlton. Make sure you don't miss a moment by booking your place from the Club Doncaster Box Office on 01302 762576 or by going to tickets.clubdoncaster.co.uk.