Aaron Lewis says his new Rovers teammates have really helped him to settle in to the squad as the right back make his professional debut on Saturday. 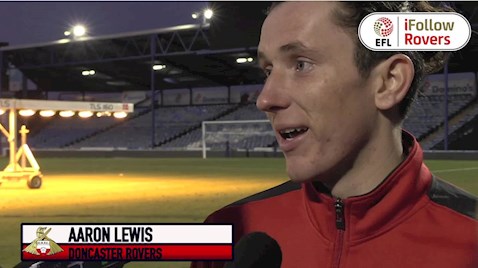 Lewis was a standout performer in Rovers' 1-1 draw at fellow promotion hopefuls Portsmouth in Sky Bet League One, and the man on loan from Swansea City felt it was an experience like no other at Fratton Park.

"I really enjoyed it, and it was a great place for me to come and make my debut what with the atmosphere and 18,000 fans here, but whether it was here or back home, the team really spurred me on to do well," he said.

"I prepared how I normally would for any other game, it doesn't make a difference whether it's a first team game or another game, I knew I'd be ready when I was called upon and hopefully I have proved that.

"I was given a good test coming up against Ronan Curtis who is one of the best players in this league, getting booked in the first half is never ideal but I felt it still didn't really affect my game. I've enjoyed my day out though that's for sure."

Rovers went in front through Mallik Wilks' first-half effort, being pegged back by Omar Bogle's close range finish, and Lewis felt the disappointment of coming away with just a point shows just how far the squad has come.

"It was a game that we knew would be a tough one, I've seen from the minute I came through the door what the manager expects though, and I think it says a lot when we come away from Fratton Park disappointed with a draw, he added.

"These last couple of weeks especially have shown just how hard everybody works as a group to move in the right direction, you saw it here towards the end of the game that we were up against it but we stuck it out.

"We have to take it game by game now, especially at this stage of the season, we're in a good position in the league and we all want to move forward, and we have some great momentum to take into the Peterborough game next week."