Grant McCann felt his side invited Scunthorpe United onto them in the second half of Saturday's M180 derby at Glanford Park, but praised his side's first-half showing. 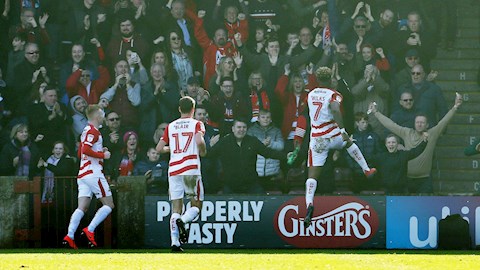 Rovers had to settle for a point when a Kyle Wootton headercancelled out Mallik Wilks’ first half opener. While McCann was keen to praise his side’s dominant first half display, he could not hide his disappointment that Rovers had allowed Iron to get back into the game.

“In the first half I thought we were excellent, but in the second half we were bang average,” he said.

“We weren’t clinical enough, with the chances we created we could have been two or three up. In the second half we didn’t press them, didn’t pass the ball well enough and didn’t create many chances. We could have put the game to bed, but we were slashing at things.

“We invited pressure onto ourselves, we sat off them and that’s exactly what a direct team like Scunthorpe United want. Their gameplan worked and they deserved the goal, in the second half they were better than us.”

Despite McCann’s disappointment, the manager believes his young side will learn a lot from the match.

“We played in to their game plan in the second half, we played the way they wanted us to,” he added.

“It’s never easy coming to Glanford Park and Scunthorpe are on a bit of a roll, they drew with Sunderland here and have picked up some wins.

“It’s a learning curve for us, we’ve learned that we need to make sure we follow our plan because when we do that, nine times out of 10 we will win.”