Paul Stancliffe’s U18s team have got off to a flying start in 2019 beating Chesterfield 4-2 in a thrilling game at St George’s Park Graves. 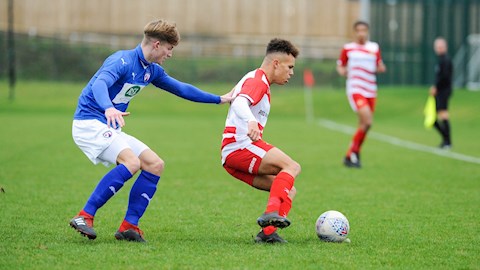 Stancliffe made four changes to his side that drew with Grimsby in December. Rieves Boocock, AJ Greaves and Branden Horton have all been with the first-team over the festive period, while Cameron Barnett was withdrawn through injury.

The home side had the first chance of the match when Levi Amantchi muscled his way through the Rovers defence before shooting low into Dec Ogley’s arms.

Moments later, Amantchi broke the deadlock after turning past Cameron Baldock-Smith and hitting the ball past the Rovers keeper.

The Chesterfield forward – who has sporadically featured in their first-team – continued to run the show as he found himself through on goal once more but Ogley was equal to his effort.

Rovers settled into the game and Jack Watson managed to pull one back after he tucked the ball past Teddy Unwin-Marris in the Chesterfield goal.

Within minutes, Rovers had turned the game around. Spireites defender Chandler Gibson headed the ball past his own keeper following a threatening cross from Myron Gibbons.

Rovers continued to dominate. Will McGowan tried his luck, belting an effort from 18 yards, but was denied. Minutes later, Rovers were awarded a penalty after Watson was fouled by the Spireites keeper.

Gibbons put the team into cruise control before half-time, his penalty went to the left of the keeper who dived in the opposite direction.

Chesterfield responded straight after half-time, putting pressure down Rovers’ right. A cross was spilt by Ogley which opened the door for striker Brandon Howard to clip it into goal.

At the opposite end of the pitch, Will McGowan won Rovers a second penalty after drawing a challenge with a clever chop to the right. Gibbons took again, successfully slotting it to the left once more.

After converting two penalties, Gibbons was hungry for a third but his burst into the box and his low effort went wide of the goal.

McGowan forced another good save from Chesterfield goalkeeper Unwin-Marris late on. A stretching dive, low and to his right the only thing denying the Rovers’ midfielder and keep the score respectful.