Grant McCann was pleased with his team's second half response in Saturday's draw with Burton Albion. 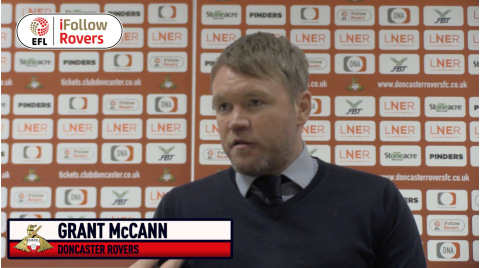 While McCann felt that the first half was not up to Rovers' usual standard, he was quick to praise his team's performance in the second period.

"It's a frustrating day and we'll have to move on quickly and look forward to the FA Cup game," he said.

"I thought Burton Albion were better than us in the first half. They had more control and energy than us, they picked the second balls up and they played quicker than us, but the response from the boys in the second half was outstanding.

"To show that drive and determination to get back into it, that's what you need to be a top six team."
McCann made a double substitution at the break, introducing Alfie May and Tyler Smith. The latter very nearly had a dream debut when his brace looked to have secured three points for Rovers before Burton grabbed a late equaliser.

"Alfie May and Tyler Smith's introduction at half time got us back in the game and almost won it for us," McCann added.

"Tyler is a very good player, very sharp. We knew he could get on the shoulder and get in behind teams and he showed that.

"His first goal is a poacher's finish from a great cross by Danny Andrew and the second one is a great pass and a cool finish. I was really pleased for him to make an impact like that on his debut. Sheffield United have got a star on their hands."