Grant McCann says his side will have a no fear mentality when they take on Sky Bet Championship side Preston North End this weekend. 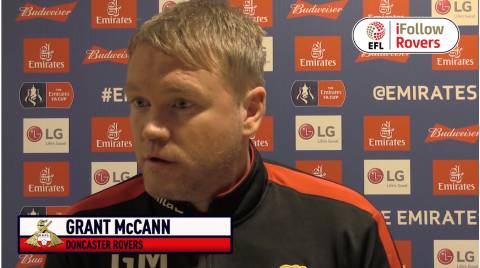 Rovers go into the game on the back of just one defeat in 11 in all competitions, and the manager says they will play with the same attacking intent at Deepdale.

He said: “I’m pleased with the run we’ve been on, we’re playing well and our best performance came on New Year’s Day in all aspects.

“It’s going to be a tough game, we’ve watched them a few times and look a real threat with some of the forward players they have.

“We’re up against it but we’ll go there with nothing to fear, we’ll play our game and won’t change because of the opposition.”

With a place in the Emirates FA Cup fourth round at stake, McCann wants his side to maintain their high levels of performance.

He added: “The challenge for us now is to continue that and maintain the levels we’ve been reaching over the past 11 games.

“It’s a different competition which can be a nice distraction from the league, we’ve seen it can start a good run after the result we had against Chorley.

“We need to make sure we focus on ourselves and play quickly, Championship sides are very quick and precise which will be a good test for us.”