Grant McCann said he was proud to watch his side’s performance as they welcomed 2019 in style with a 5-0 win over Rochdale in Sky Bet League One. 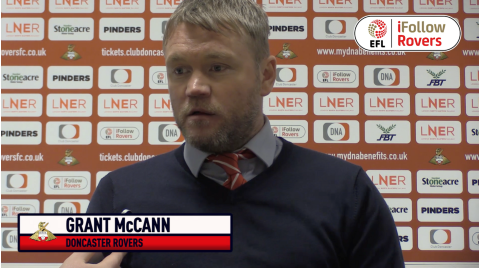 It was a very happy new year at the Keepmoat Stadium as Rovers got off to a blistering start with Alfie May finding the net just 40 seconds after kick-off.

Goals from Ali Crawford and John Marquis had the game sewn up by half time, while a second from Marquis and a superb diving header from James Coppinger in the second-half made for a perfect start to 2019 for McCann’s Rovers.

“I thought we played really well.  We started brightly, that was the message to the group before the game and we possibly could have had two or three goals in the first five minutes. I was proud to watch them,” he said.

“I think what I’ve seen is a good reaction from the Fleetwood game.  We could possibly have had five or six at Gillingham and the boys were disappointed to concede so late.  What you’ve seen today is the boys putting their bodies on the line trying to keep a clean sheet in the second half.

“To beat a team like Rochdale who have taken six points from nine over the Christmas period is excellent.  They’ve got players who can hurt you, but we stood up to it and we were ruthless at the other end.”

Seventeen goals in the last six outings mean that Rovers are now the second highest scoring team in League One behind Luton Town and McCann believes goal difference could prove vital to Rovers  finishing the season in the play-off places.

“At the start of the season everyone was questioning where the goals were going to come from and I’m pleased we’ve silenced a few doubters but there’s more to come from us,” said McCann.

“We’ve added Smith, we’ve added Sadlier and Coppinger was on the bench today, so we’ve got firepower throughout the squad. If we want to be successful this season, we have to have a good squad.  Nobody sulks in the changing room, everyone is in it together.

“We’ve scored five today which has helped our goal difference and will keep us amongst to top six.”

The first issue of DNA Quarterly is now available. It costs just £4 and is available from the Club Doncaster Box Office and online at tickets.clubdoncaster.co.uk.