Rovers’ Development side had to settle for a point after pushing a strong Everton U23 side all the way in the Premier League Cup in an entertaining clash at the Keepmoat Stadium. 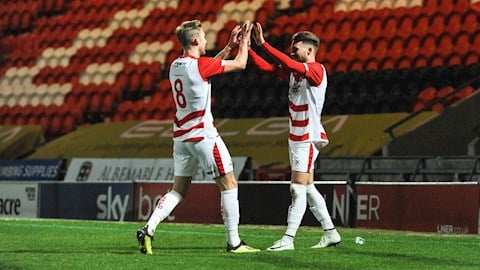 Kieran Sadlier, Alfie May and Myron Gibbons were on target for John Schofield’s side, who became the first side to take a point from - or even score a goal against - David Unsworth’s Toffees outfit.

Rovers took an early lead after Alfie May chased a ball down, which he poked across and the ball broke nicely for Sadlier to smash home.

The Toffees levelled whenNathan Broadhead got on the end of a ball over the top and linked it over Louis Jones.

The young Rovers keeper pulled off agreat low save from Basala Sambou shortly afterwards, before May ensured his side took a lead into the break.

He got on the end of a Will Longbottom through ball, before confidently slotting the ball past Joao Virginia.

Gibbons put Rovers further ahead seven minutes after the restart when he pounced on a loose ball.

Schofield introduced some younger players as the tie wore on and Unsworth’s side hauled themselves back into the game through a diving header from Matthew Foulds, then they drew level when Fraser Hornsby slotted home.

Broadhead tried a long-range shot to nick an unlikely win for the hosts, but Rovers’ young goalkeeper Jones was equal to it.